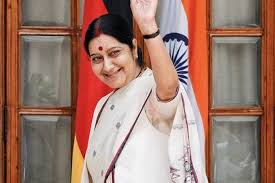 SUSHMA SWARAJ: The Prime Minister India Would Not Have  …

Never expected to write sort of an obit for our beloved External Affairs Minister Smt. Sushma Swaraj who right now is being cremated in Delhi. Almost as popular as PM Modi in diplomatic circles, Sushma made it on her own to the top, no blue blood in politics. She was 67. Not the age to die. She touched many a heart cutting across nationalities, forging closest ties with SAARC countries, serving her best to NRI community and standing tall at global summits with her short but fierce stature. It is not even an year since she became the first Indian minister to be invited to OIC where she quoted from sacred Sanskrit texts to an Arab audience. She minced no words in calling a spade a spade and did not desist from her scathing attacks on terror. No wonder, when most foreign dignitaries mourn her loss, our neighbour Pakistan BLACKED OUT media news coverage on her because, they were the hardest hit by her in world stage. Sushma Swaraj brushed shoulders with world leaders as an equal. She did India proud with her roaring addresses, all the while draped in beautiful saris with kumkum (vermilion) lighting up her bright, cheerful face. Sushma was striking as the bold and confident, yet traditional Indian Nari, the face of Modern Indian Woman.

Listen to Sushma Swaraj at OIC in Abu Dhabi, that made Pakistan, the founding member of OIC skip the meet! Sushma quotes from Rig Veda:

Yet, Sushma wasted no time when it came to issuing medical visas to Pakistanis who tweeted her for help. The ex External Affairs minister was easily accessible and approachable to the commoners not only from India but from world over via Social Media platform. She negotiated and rescued hostages and made NRI lives easier forever, streamlining procedures. Her humanitarian side despite the power she wielded won her many hearts from all sections of the society. She will be hard to replace.

Om Shanthi Sushmaji! You will be sorely missed! Many of us fancied you for No.2 after Modi ji, as his likely successor. It is not to be. Why cannot BJP leaders take better care of their health. Second precious gem lost after Manohar Parikar, CM of Goa and Ex Defence Minister. Mother India’s most cherished children.

This site uses Akismet to reduce spam. Learn how your comment data is processed.