Turkey, Malaysia and Pakistan must confer citizenship to Syrians and Palestinians. They are welcome to absorb even Kashmir Muslims from India, and other muslims. With such broadminded gallant nations in our midst, why should India offer citizenship to muslim refugees. Isn’t there Saudi with open doors welcoming one and all of their Umma twenty four hours of the day, seven days of the week, thirty days of the month.

It is the Dharmic duty of the only Hindu nation India (Other than Nepal) to take care of global Hindus who may be persecuted elsewhere for religious reasons. It is our Karma. India is first for followers of Dharma. Until the British categorized Buddhism, Jainism and Sikhism as separate religions a mere hundred years ago, all these folds were known as sects of Sanathana Dharma (Hinduism ) only. These are the Dharmic ways of life, not organized religions like the Abrahamic. Not a single extra Abrahamic is welcome in India, because the rest of the world is divided between Islam and Christianity. You have places to go to. Hindus have nowhere else to go as refugees. Except India.

When PM Shri Narendra Modi spoke of ‘achchae din’ in his election campaign, I hardly believed him. Now I do. Citizenship Amendment Bill, 2019 tabled by Home Minister Shri Amit Shah today is one more milestone in the direction. The Bill was passed in Lok Sabha, the Lower House of India’s parliament with a thumping majority of 293 votes to 82 (against). One more election promise of Bharatiya Janata Party (BJP) kept/fulfilled.

The new Act (when the Bill transforms into one) will facilitate legalizing the residential status of global Hindus (refugees from Afghanistan, Pakistan and Bangladesh) seeking Indian citizenship, cutting short their agonizing waiting time by years. The Hindu brothers and sisters are in India fearing persecution back home in these Islamic nations.

The Bill in effect seeks to amend The Citizenship Act, 1955 to make Hindu, Sikh, Buddhist, Jain, Parsi, and Christian illegal migrants from Afghanistan, Bangladesh, and Pakistan, eligible for citizenship of India. I wish they can exempt Christian immigrants though.

In other words, the Bill intends to make it easier for non-Muslim immigrants from India’s three Muslim-majority neighbours to become citizens of India.

It must come as a great relief to Pakistan Hindus who fled the terrorist nation seeking asylum in India. Hindus have been systematically persecuted in Pakistan in the last 70 plus years. With their daughters abducted, raped and forcibly converted to Islam, the population of Hindus is down to 1.6% of total population of Pakistan, from 13% in 1947. Bangladesh is even worse. Hindu temples attacked randomly and razed, and Hindu properties seized forcibly, everyday is a living nightmare for the minority Hindus of Bangladesh.

Both Indian Media and foreign Media as well as the Leftists and Opposition in India are against the Citizenship Amendment Bill as it conspicuously excludes illegal MUSLIM IMMIGRANTS seeking Indian citizenship. The bill’s ramification will be felt across India’s Seven Sister states of North East, where the illegal muslim Bangladeshi immigrants are slowly and steadily outnumbering and displacing the non-muslim Indian citizens.

Muslim refugees have many nations around the world to flee to. Why have not the oil rich Arab nations taken in the Palestinians. Why should the muslim Rohingya refugees come to India when there are over 50 islamic majority or islamic nations in the world. We are already a 1.3 billion nation.

India is the only Hindu majority nation in the world after Nepal. The only Hindu nation whose doors must be kept open always for any global Hindu seeking refuge. It need not have to be just an Afghan Hindu or Pakistan Hindu or Bangladesh Hindu.

Where were these sick and so-called secular media when ISIS decimated the Yazidis. Yazidis have Hindu roots seemingly. Or a lot of their customs and traditions are Hindu-like. When the Yazidi women were dragged out and raped 24 hours a day in the name of one particular God, where were you shameless journalists.

India must expel the illegal Bangla muslims next. Citizenship registry in every single district and state of India is a must. The Bengali muslims have penetrated deep into south India as well. Anyone employing them (in Coimbatore, Erode, Kerala for instance) for cheap labour must be prosecuted. It is extremely important for India to flush the vermin out.

Will Hindus Cease To Exist In Bangladesh & Pakistan?

How Muslims in India (and elsewhere) are multiplying like rats and rabbits drowning the sons of the soil:

Here is a small sample from just a single Indian state West Bengal. 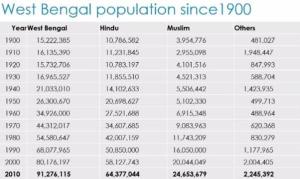 This is why India’s next mission must be to introduce a strict Family Planning for every Indian citizen. PM Indira Gandhi forced the family planning in the 1970s and 80s only on Hindus exempting the muslims that is costing India dearly. Any Indian citizen irrespective of his/her religious affiliation should lose Passport and Aadhar (identity) if going for a third kid from a cut-off date for instance from 2020 (an idea) .

When will the Leftists in India talk about population explosion by Muslims in India and around the world that eats into the world produce hurting national and global economies.

When will our media talk about family planning for Indian muslims.

What is your answer to this media guys.